I had been joking with Liam Lawsons dad Jared for the last 2 years about Liam doing some racing with us in our enduro events and one thing or another the timing wasn’t there. I am sure at times he was tempted but F3 narrowly wins over grassroots racing most times so it never happened until I happened to hear Liam was home and board of being isolation so i took my opportunity and asked again and next minute we are doing a seat fitting at Pakuranga  Auto and sitting with potentially NZs next F1 star all the time trying to convince him our Levin had the goods.

Friday came and we signed up for a Hampton Downs test day. Liam was on the track pretty early getting his head around the car and learning its brakes etc. I had secretly signed up Jared for the test day as well and had arranged for another car to be there and for the first time father and son got to be on the track together. It was good to see them having some fun in a social environment as the track can be a stressful place when there is a lot at stake. 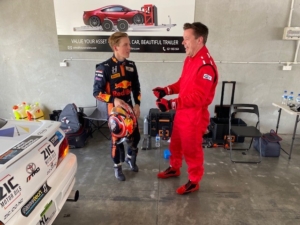 Saturday came and Liam went out and qualified 18th for race one. Every 2kCup expert was there and had all bought their A Game. Liam finished a very respectable 8th with only the best of the best 2kcuppers in front of him.

Nik Lowndes had decided to stay in AKL for the weekend after testing our Ssanyong on Friday so he jumped in the DC5 and after I had qualified it at the rear Nik got to 29th which was quite astounding.

At the lunch break we had organized for Liam to take his folks and friends for a ride. There was some very white knuckle co drivers, particularly his mother who had challenged herself to do it but I’m sure was second guessing her decision all the way round . What was super cool was Liam took Greg Stevens for a ride. Greg is a volunteer Marshall and without Greg and his fellow marshall’s we couldn’t race, ever. Greg was over the moon.

We had to concede our car the Levin wasn’t  the fastest so Mark Mallard offered to swap his highly specked Levin to give Liam a fighting chance of being on the podium for the day.

Liam didn’t disappoint and Mr consistent drove so well, even doing a 1:20.5 a full half second faster than what Mark had ever done in the car and Marks no slug. Liam came in first with Karl Gaines and Graham Ball 2nd and 3rd respectively.  Both Karl and Graham were stoked to be there with Liam and imagine the better work stories they can tell when Liam makes F1 in 2 years time!

It was great to have Liam and his family involved. the 2kCup family were all grateful and fully appreciated Liam giving up his time for no reward. I would personally like to thank Liam for being so approachable, talking to my friends and their families too even taking time to talk to Peter Sprague’s boys in Timaru on the phone who are both mad keen fans and follow Liam.  Fingers crossed they will be back with us at 24red in January in the production series driving together.

Want to join the discussion?
Feel free to contribute!